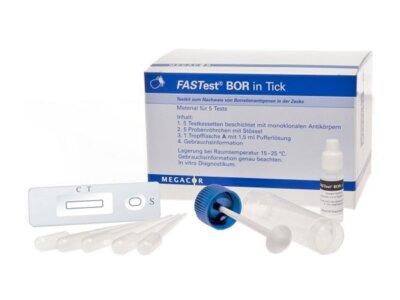 Qualitative Detection Of Borrelia Antigens In the Tick

FASTest BOR in Tick is a rapid immunochromatographic assay for the detection of Borrelia Antigens in the tick. In the case of a positive test result therapeutic and prophylactic measures can be initiated immediately after a tick bite.

Why is it important to test for Borrelia Burgdorferi Infection?

Lyme Borreliosis is a common tick-borne infection which is caused by spiral bacteria of the genus Borrelia, which is spread mainly by ticks. The tick, whether it is infected on not with Borrelia, is heavily dependent on seasonal and geographical influences.

Previously detection of Borrelia antigens in the tick could only be done by running a laborious, time consuming and expensive PCR in a specialised laboratory.

Early diagnostics of the sucking tick is important; now with FASTest BOR in Tick, it is possible to detect potential Borrelia antigens in ticks quickly, simply and reliably.

What are the symptoms of Lyme Borreliosis?

Clinical symptoms of this disease may not appear until a few weeks or months after the tick bite because of the long incubation time. Symptoms, however, can include

Advantages of FASTest BOR in TICK