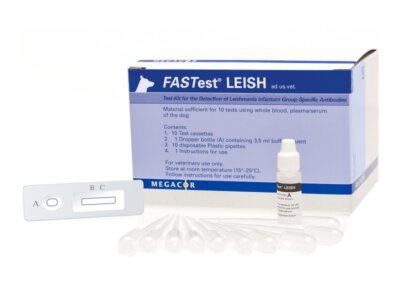 If there are any antibodies present in the sample they will reach the conjugate pad and react with mobile monoclonal antibodies labelled with gold particles.

Why is it important to test for Canine Leishmania?

Canine Leishmaniasis is a protozoal disease caused by the proliferation of Leishmania infantum in organisms. It is passed on by small insects, the phlebotominae, which are both hosts and vectors. Although detected primarily near the Mediterranean Sea, it has also been detected in other regions of Europe.

It is transported by sand-flies (phlebotominae) via stings to the animal and they infect and reproduce in macrophages and cells of the animal’s reticuloendothelial system, also affecting the liver, spleen, bone marrow, lymph nodes of the animal.

What are the symptoms of Canine Leishmania?

The signs that Leishmania are present can be any of the following:

Any suspected animal should be tested and especially from endemic Leishmania regions and re-tested in at interval of 2-4 weeks. Any animals which are known to be from endemic areas and any asymptomatic animals can also show a borderline weak antibody titre compared to any clinically diseased animals will show a clear increase in the titre between the two tests. This comparison means that the indirect detection of antibodies using FASTest LEISH is of greater diagnostic importance.

FASTest LEISH Instructions For Use