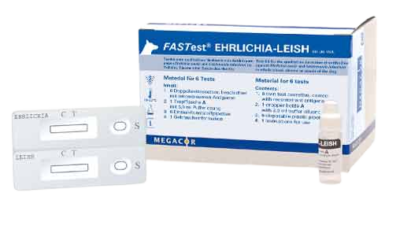 Fast test for the detection of antibodies against Ehrlichia canis and Leishmania infantum in whole blood, plasma or serum of the dog

Both the canine Leishmaniosis (Leishmania infantum) and the canine monocytic Ehrlichiosis (CME, Ehrlichia canis) count among the most important vector-transmitted infectious diseases / travel diseases of the dog. Coinfections play a major role, because these dogs are more likely to become ill. In the literature, there are hints that an upstream Ehrlichia infection possibly sensitizes for a Leishmania infection.
The seroprevalences for the Ehrlichiosis and Leishmaniosis vary strongly depending on country (endemic or non-endemic) and study. In addition, indigenous infections in dogs with symptoms of canine Leishmaniosis, but without a travel report, are increasingly being described in non-endemic areas (e.g. Germany).
The canine Ehrlichiosis is characterized by a very long incubation period (Ø 4–5 to 12–13 years) and a non-specific clinic and is therefore also referred to as “silent killer”!
Dogs with clinical Leishmaniosis show typical clinical symptoms and/or clinic-pathologic findings. Sub clinically infected dogs (infected, but clinically healthy) do not show any symptoms during clinical examination and no clinical-pathologic findings.
The consequences of such coinfection from an immunological, therapeutic and diagnostic point of view are known to very few veterinarians. Therefore, FASTest® EHRLICHIA-LEISH is useful as rapid qualitative antibody detection test in dogs suspected of having leishmaniosis, ehrlichiosis or a coinfection.

Why is it important to test for Ehrlichia canis?

Canine Ehrlichiosis is an acute to chronic disease due to the appearance of coccoid bodies in the cytoplasma in monocyte cells. Ehrlichia canis is transmitted by the brown dog tick, Rhipicephalus sanguineous. Although detected primarily near the Mediterranean Sea, it has also been detected in other regions of middle Europe, the Far East and the USA.

Why is it important to test for Canine Leishmania?

Canine Leishmaniasis is a protozoal disease caused by the proliferation of Leishmania infantum in organisms. It is passed on by small insects, the phlebotominae, which are both hosts and vectors. Although detected primarily near the Mediterranean Sea, it has also been detected in other regions of Europe.

It is transported by sand-flies (phlebotominae) via stings to the animal and they infect and reproduce in macrophages and cells of the animal’s reticuloendothelial system, also affecting the liver, spleen, bone marrow, lymph nodes of the animal

What are the symptoms of Ehrlichia canis?

The clinical symptoms are intermittent and variable in gravity, so a biological diagnosis is necessary in all cases of clinical suspicion (thrombocytopenia, anaemia and hyperglobulinaemia). It is also advised to systematically screen for canine Ehrlichiosis in endemic areas.

What are the symptoms of Canine Leishmania?

Any suspected animal should be tested and especially from endemic Leishmania regions and re-tested in at interval of 2-4 weeks. Any animals which are known to be from endemic areas and any asymptomatic animals can also show a borderline weak antibody titre compared to any clinically diseased animals will show a clear increase in the titre between the two tests. This comparison means that the indirect detection of antibodies using FASTest LEISH is of greater diagnostic importance.

FASTest Ehrlichia-Leish Instructions For Use