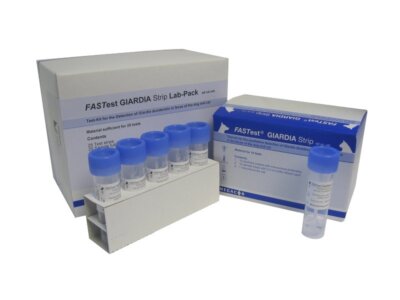 FASTest GIARDIA Strip is based on the latest rapid immunochromatographic technique. It contains two unique monoclonal antibodies. One of these monoclonal antibodies is bonded to latex particles; the second is immobilized in the test zone of the strip. If the stool sample extract contains Giardia antigen, these will form an antigen-antibody complex with the latex particles.

Giardia duodenalis (syn. G. lamblia or G. intestinalis) is a protozoan parasite commonly inhabiting the upper intestinal tract of dogs, cats and a wide range of other animals including humans. Unlike some other products, FASTest Giardia detects both the active disease (trophozoite) and the carrier state (cyst).

Giardia tends to cause signs mainly in young animals e.g. dogs and cats aged between 6 weeks to 3 months. Asymptomatic carriers are possible. Giardia is a protozoan capable of infecting humans as well as other animal species e.g. Bovine, Feline and Canine. Giardia duodenalis exists in two different morphological stages: an asexual, intestinal growth form called a `trophozoite’ and an encystment form called an `oocyst’. Infection is achieved via oral ingestion of faeces or contaminated water.

Why is it important to test for Giardia?

What are the symptoms of Giardia?

Clinical signs of Giardia infection are typically acute or chronic diarrhoea, loss of appetite and/or growth retardation. Individuals most at risk are less than 1 year old, immunosuppressed or malnourished. Prevalence rates can be as high as 10% in the normal population of dogs and cats and much higher in young animals (30% higher), particularly those with diarrhoea. The clinical diagnosis of Giardiasis is therefore difficult and needs to be supported by reliable laboratory tests such as FASTest GIARDIA.

Thus Giardia should be high on the list of differential diagnoses when a young dog or cat is presented with the above clinical signs.

Fastest Giardia Instructions For Use

FASTest Giardia Strip Instructions For Use