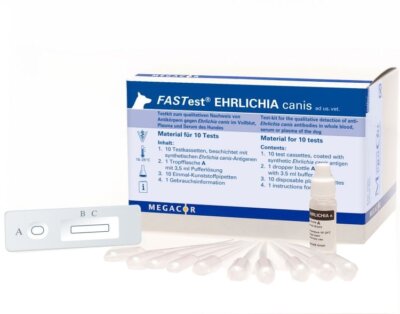 Detection Of Antibodies Against Ehrlichia canis

The FASTest EHRLICHIA canis test kit is a rapid immunochromatographic screening test for the detection of anti-Ehrlichia canis antibodies. It can be used with serum, plasma or whole blood up to 28 days after infection. The method employs a unique combination of a specific labelled antigen, which is conjugated on dye particles, and this protein is immobilized to the solid phase membrane.

Why is it important to test for Ehrlichia canis?

Canine Ehrlichiosis is an acute to chronic disease due to the appearance of coccoid bodies in the cytoplasma in monocyte cells. Ehrlichia canis is transmitted by the brown dog tick, Rhipicephalus sanguineous. Although detected primarily near the Mediterranean Sea, it has also been detected in other regions of middle Europe, the Far East and the USA.

What are the symptoms of Ehrlichia canis?

The clinical symptoms are intermittent and variable in gravity, so a biological diagnosis is necessary in all cases of clinical suspicion (thrombocytopenia, anaemia and hyperglobulinaemia). It is also advised to systematically screen for canine Ehrlichiosis in endemic areas.

FASTest EHRLICHIA canis Instructions For Use