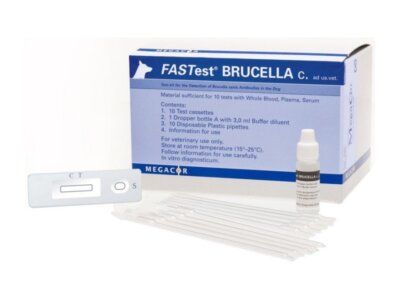 FASTest Brucella Canis is a rapid immunochromatographic test for the detection of IgG antibodies in the anti-coagulated whole blood, plasma or serum of dogs. Showing high Sensitivity of 90.5% and Specificity of 88.4%, FASTest Brucella Canis test kit enables the veterinarian to confirm quickly and on-site an estimated diagnosis and to start therapy and a Brucellosis Prevention Program adapted to the breeder’s needs.

Brucellosis in the dog shows low prevalence but occurs most commonly after ingestion of contaminated placental materials or aborted foetuses, vaginal discharges from infected bitches that are in heat or who abort, and during breeding. Following an abortion, Brucella Canis may be shed for several weeks or, intermittently, for months.

Brucella Canis is a zoonotic organism and it is different for male and female dogs. Treatment for the disease can often be very expensive and it is thought that a combination of minocycline and streptomycin is useful but unaffordable.

Why is it important to test for Brucella Canis?

Brucella Canis is a disease which can affect both humans and animals. The way it is transmitted is usually through ingestion or contact with the infected organism through with mucous membranes or any broken skin. Any exposure to any contaminated placenta, aborted foetuses or fetal fluids, virginal discharges from infected bitches who are on heat, breeding, abortion or had full term parturition.

Brucella Canis is the cause of significant reproductive failure and it is extremely important for kennels and breeders to regularly test their dogs for this disease.

What are the signs and symptoms of Brucella Canis?

In females, the most prominent sign is abortion after 45-55 days of gestation in about 75% of the cases, but early embryonic death and reabsorption, or abortion 10-20 days after mating is reported. These may go unnoticed and the female may present with the chief complaint of ‘failure to conceive’.

In males, the main sign is epididymitis of one or both testes, and infertility. Testicular atrophy and a moist scrotal dermatitis may be present. Semen from infected males usually contains large numbers of abnormal sperm and inflammatory cells, especially during the first 3 post-infection months. Chronically infected males may have no sperm or reduced numbers of immature sperm. Non-specific signs in both sexes include lethargy, loss of libido, premature ageing and generalised lymph node enlargement.

Brucella Canis can be transmitted dog to dog by the following ways:

Dogs who contract Brucella Canis may also display the following:

It is suggested that there is an incubation period for dogs who have contracted or have been in contact with Brucella Canis. This incubation period can vary from a minimum of 2 weeks to several months. In most cases, the dogs are tested and positively identified with the disease within 8 -12 weeks of being infected.