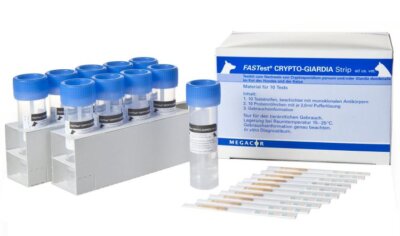 FASTest CRYPTO-GIARDIA Strip is based on the latest rapid immunochromatographic ‘lateral flow’ technique for the detection of Cryptosporidium parvum and Giardia duodenalis antigens in faeces samples. When the antigens are present in the sample they will react with the conjugate area containing two different mobile monoclonal antibodies which will then flow along the test strip to be captured in the test areas.

FASTest CRYPTO-GIARDIA Strip is for use on cat or dog faeces. Due to the variable distribution of Cryptosporidia parvum and Giardia duodenalis antigens in the faeces, the sample will have to be mixed up homogeneously before testing. Constituents like grass, mucosal membrane, and blood should be avoided in samples because they can cause non-specific reactions or migration problems. Exceeding the sample volume can lead to brownish staining of the test and/or control lines or to a flowback of C-line material into the sample buffer fluid (no or weak appearance of the C-line) which will invalidate the result.

Why is it important to test for Cryptosporidium?

Cryptosporidiosis (Cryptosporidium parvum) is an important protozoan disease causing diarrhoea in many domestic animals and synanthropic species e.g. hedgehogs and reptiles, as well as humans (zoonosis).

Cryptosporidium parvum also commonly causes problems in calves and, together with Rotavirus and Coronavirus, is responsible for neonatal diarrhoea which can lead to economic losses.

Cryptosporidium parvum has also been reported in dogs (particularly young dogs less than 6 months old), cats, hedgehogs and exotics – especially those which are under stress or immuno-compromised.

Why is it important to test for Giardia?

What are the symptoms of Cryptosporidia parvum and Giardia duodenalis?

Advantages of the FASTest CRYPTO-GIARDIA Strip