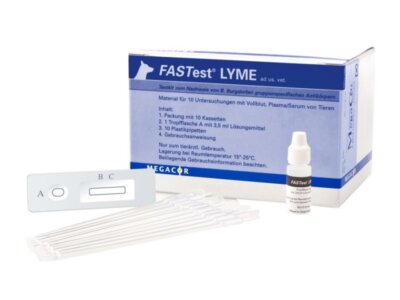 In the UK’s biggest ever study of ticks and tick-borne diseases, veterinary laboratory scientists at Bristol University signed up more than 1400 local vets and their canine clients.

Between April and July 2015, the months when parasitic ticks are most active, vets examined over 14,000 dogs reporting that nearly 30% were found to carry blood-sucking ticks potentially infected with deadly dog diseases including Lymes Disease, Anaplasmosis and the new threat, Canine Babesiosis.

Fronted by BBC wildlife presenter and naturalist, Chris Packham, the project showed that blood-sucking ticks are significantly more abundant and more widespread than 10 years ago. Although relatively few ticks are infected with Anaplasma phagocytophilum – a blood parasite causing symptoms including fever, lethargy, vomiting and diarrhoea in dogs, the increasing number of ticks not only means an increased risk of Anaplasmosis, but also of Borrelia infection – the microbe that causes Borreliosis, commonly called Lymes Disease.

Lymes Disease can also cause serious illness in humans with between 2,000 and 3,000 people in England and Wales newly infected each year and about 1 in 8 picking up the disease while travelling abroad. Treatable with antibiotics if caught early enough, serious flu-like symptoms including painful joints, together with the nervous system and heart problems, can develop if treatment is delayed.

90% of dogs with ticks were found to have the common UK variety, Ixodes ricinus. However, a number of dogs in Southwest England and Wales were found to carry the continental Brown Tick, Dermacentor reticulatus. This new invader carries the potentially fatal dog disease Babesiosis which attacks the dog’s red blood cells and shows in red/brown urine, fever and jaundice.

Be aware, avoid and act

The best way to protect your dog from Borreliosis (Lymes Disease), Anaplasmosis and the new scourge, Babesiosis is to be aware, avoid and quickly act against carrying ticks: