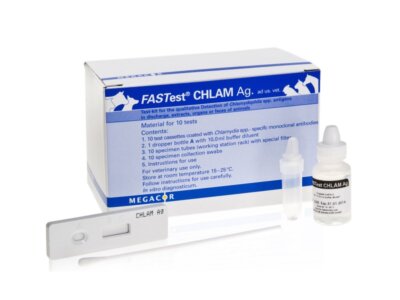 Pet cats, dogs and birds can show the same symptoms for a range of minor and more serious infections. Some, such as Chlamydiosis, can have wider public health concerns or economic impact. MEGACOR’s Veterinary Diagnostic Test Kit FASTest® CHLAM Ag provides a swift and sure test to diagnose or discount a wide range of Chlamydiophila infections.

Chlamydiosis is better known as psittacosis or parrot flu

In birds, Chlamydiosis is better known as psittacosis or parrot flu, named from the symptoms of laboured breathing, lethargy and nasal discharge seen in pet parrots and budgies. Chlamydiophila psittaci actually infects most bird species including commercial flocks of chickens, ducks and pigeons. Transmissible to humans through inhaling fine particles of faeces or body fluid droplets from an infected bird, psittacosis is a notifiable disease usually treatable with a combination of antibiotics.

Common symptoms of Chlamydiosis in cats

Conjunctivitis and respiratory difficulties are the most common symptoms of Chlamydiosis in cats. The causative bacteria, Chlamydophila felis, doesn’t survive well outside the cat’s body, so the most common route for infection is the close contact between mother and kittens, and between kittens in the same litter – especially in conditions of overcrowding. For breeders of pedigree cats, careful husbandry, timely vaccination and veterinary diagnostic testing of suspected cases will maintain a reputation for healthy, lively kittens and keep expensive antibiotic treatment to a minimum.

For the FASTest® CHLAM Ag test, swabs can be taken from most conveniently accessible parts of an animal showing symptoms of suspected Chlamydia infection. The swab is then mixed with the pre-prepared specific anti-Chlamidiophila spp. antibody supplied with the kit. After 15 minutes, a single drop of the mixture is spotted onto the plastic test cassette. 20 minutes later, the all-clear is indicated by a reaction to the built-in control only, or a positive detection unequivocally shown by a further colour reaction.

Chlamydiosis is, perhaps of most concern to dog owners and breeders. Infection in dogs is not diagnosed as often as in birds and cats, possibly because the symptoms can be non-specific and the cause misdiagnosed. Fever, broncho-pneumonia, peritonitis, lack of appetite, vomiting, diarrhoea, skin lesions and conjunctivitis have all been seen in animals later found to show an antibody response to Chlamydiophila spp. in their blood. It’s in cases like this – where vital decisions on treatment and vaccination can’t be delayed, that Vetlab’s Veterinary Diagnostic Test Kit FASTest® CHLAM Ag really proves its worth.