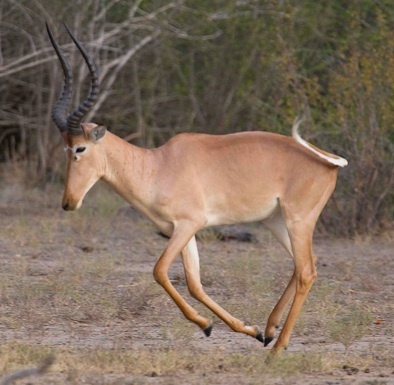 A recent survey showed that people knew more about animals that have never existed – except in films, fables and stories – than they do about real animals on the EDGE of extinction.

Begun in 2007, Zoological Society London’s EDGE programme aims to raise the public’s awareness and concern for the Earth’s Evolutionary Distinct and Globally Endangered mammals, birds, reptiles, fish and invertebrates – including corals, whose existence is, quite literally, on the EDGE.

Concerned that the public had little awareness of the world’s most endangered wildlife species, the Zoological Society of London’s (ZSL) EDGE programme put together a combined list of factual animals from nature, and fantastical beasts from TV, film and literature. 1000 people were then invited to view the list and tick off the animals they recognised, both real and imaginary.

Beasts of lore and legend

Among the least recognised animals were some of the world’s real yet most rare animals. The few hundred remaining hirola antelope (1%), the shoebill stork of central Africa (12%) and the beautiful Australian banded anteater, the numbat (1%) were among those almost unknown among those surveyed.

Begun in 2007, ZSL’s EDGE programme aims to raise the public’s awareness and concern for the Earth’s Evolutionary Distinct and Globally Endangered mammals, birds, reptiles, fish and invertebrates – including corals, whose existence is, quite literally, on the EDGE.

Alarmingly, EDGE reports 32% of amphibian species, 12% of all bird species and 23% of mammals as being under threat of imminent extinction. Worse, two-thirds of mammal species on the EDGE currently benefit from little or no directed conservation effort.

Topping the list of mammals on the EDGE is Attenborough’s long-beaked echidna (Zaglossus attenboroughi), proving that even celebrity is no guarantee of survival. Number 1 on the EDGE bird’s list is the giant ibis with only 200 remaining individuals. As for reptiles, this unwelcome title belongs to Archey’s frog. Almost indistinguishable from frogs that lived 150 million years ago, Archey’s is described as a “living fossil”.

Understanding where and why species come under threat

Championing the desperate plight of so many of the Earth’s strange and fascinating creatures, EDGE has not been without its successes. One of the least glamorous, but potentially most significant, has been the first ever identification and mapping of those areas of the world with the highest concentrations of EDGE species.

Published in open-access scientific journal PLOS-ONE, also celebrating its tenth anniversary, ‘Global Patterns of Evolutionary Distinct and Globally Endangered Amphibians and Mammals’ will help conservationist understand where and why species come under threat, and to respond most effectively.

To find out more about our large range of veterinary products visit our website: www.vetlabsupplies.co.uk or Telephone: 01798 874567

As the impact of COVID-19, is being felt around the world, the well-being of our employees and their families is of the highest importance to us.

By putting the safety of our employees first, we have reduced our on-site staff to a minimum and we will endeavour to maintain our business operations to the highest standard possible.

We are carefully monitoring and following official guidance from the UK Government, Public Health England, WHO and CDC guidelines and in line with these; we are currently operating business as usual.

We are monitoring our stock levels on a daily basis ensuring a fair distribution of our products. We are fully committed to maintaining the supply of products during these unprecedented times.

We are open for orders from Monday through to Thursday and closing on Fridays:

We will endeavour to contact you on Friday and Monday if it is non-urgent.

Thank you to all our customers and suppliers for their support during these temporary measures.