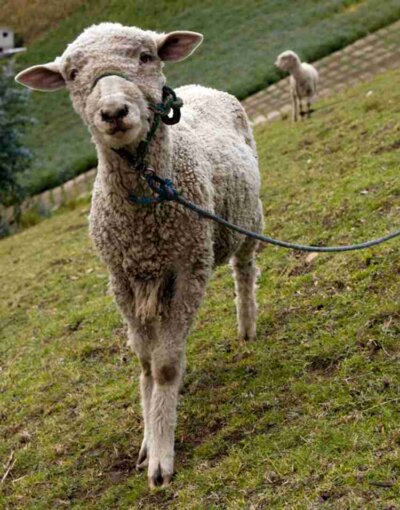 More and more Brits are keeping livestock animals as domestic pets. Exotic herd animals including llamas, alpacas, and other camel-type species have joined sheep, pigs and goats on the list of ‘pet’ animals served by veterinary laboratories.

An estimated 53,000 UK pet owners keep goats as household pets compared to the 8.5 million who own a dog and the 13 million with a resident cat. Some goat owners even allow their pet goat access rights normally enjoyed by a dog or cat; giving up a share of the sofa and fitting a ‘goat flap’ to an outer door.

With enough resources, planning and consideration, traditional herd animals can make affectionate and fascinating companions. One important thing to remember is that these are herd animals, which means they’re genetically programmed to live most happily and naturally in the company of other members of their own species, not on their own with only human company.

Increasingly popular as field pets are South American members of the camel family. Domesticated in their native lands for centuries, Llamas and Alpacas have been variously farmed for their wool, milk, meat and as pack animals. Docility has been bred into their nature – which does not mean that manners and good behaviour can be taken for granted. These are intelligent animals with a will of their own.

There are about 35,000 alpacas in the UK and around 3,000 llamas. Classed as endangered species there are fewer vicuna and guanaco – the wild ancestor of the domesticated llama. Small herds of vicuna can be seen in UK zoos and wildlife parks, with a few guanaco herds kept for commercial production their fine, high-quality wool.

Keeping camelids as pets brings its own unique welfare problems. Alpacas, in particular, can give little indication of when they are unwell before becoming seriously sick, so it’s important for owners to become observant and establish good relations with their veterinary practice as soon as they take charge of their animals.

With the resource to quick and accurate veterinary diagnostic tests, and the expertise to identify and treat the gastrointestinal parasites that can infest all field animals, your vet will help you discover the delight and fascination of caring for these beautiful – if still a little unusual, herd animals as pets.