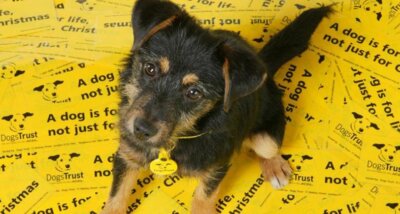 More than 300 animals given shelter

Over the whole of the festive season, the charity gave shelter to more than 300 animals but also received an average of 70 calls a day from people wanting to give up their dogs in the weeks immediately before and after Christmas.

The slogan, created by Clarissa Baldwin OBE, chief executive of the Dogs Trust since 1986, first hit the streets of Britain as a sticker campaign for 20,000 car windows and bumpers. Since then, the charity’s strap-line has gained an entry in the Oxford Dictionary of Quotations and is now a registered trademark.

In the 70s, many high street pet shops still sold puppies and kittens to casual buyers. Although this aspect of the pet trade has largely disappeared from the UK, it has been replaced by the practice of buying pups through online ads and social media contacts.

The internet can be worse for pups than a pet shop. Online sales provide unscrupulous puppy dealers with the anonymity they need. Reliable breeders will want to promote, not hide, themselves and will be more than keen to let you know who and where they are.

Reputable breeders are usually enthusiasts for the breed rather than the sale mostly specialising in one breed. They’ll be happy to provide you with pedigree and vaccination certificates – including distemper, parvovirus, kennel cough, leptospirosis and parainfluenza, respond positively to your requests to meet the pup more than once and even return your purchase if the new arrival proves unsuited to your lifestyle.

Choosing where to get your puppy is just as important as choosing what sort of puppy you want. You shouldn’t be bounced into a panic buy – especially at Christmas. If you know a highly regarded, Kennel Club Assured breeder, be prepared to on their waiting list. And always stick to the club’s 3 big don’ts: never buy a puppy from a pet shop, never pick your puppy up from a meeting in a car park or motorway service station and never buy a puppy because the seller made you feel like some sort of rescuer.

To be sure you’re doing the best for your new canine companion, for yourself and for everyone devoted to dog health and welfare. Make sure your puppy comes from a registered breeder such as a Kennel Club Assured Breeder.