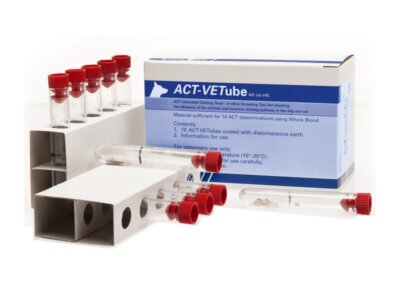 Haemostasis is the balance between keeping blood liquid enough to flow where it should, and solid enough not to flow where it shouldn’t. Inside your pet’s veins, arteries and capillaries, blood needs to flow easily and freely. But when blood meets an external cut or wound, or an internal injury, it’s important that it forms a solid clot quick enough to prevent excessive blood loss and as a barrier to infection.

Turning liquid blood into a solid clot is called ‘coagulation’. Coagulation relies on a ‘cascade’ of actions by a series of coagulation factors. Each step in the cascade acts like an accelerator or a brake on the next. This helps prevent clots forming in the wrong place. If a clot formed in your pet’s heart, it would cause a coronary thrombosis.

Blood vessel damage triggers cascade pathways. External injury triggers the faster ‘Extrinsic Pathway’, while damage within the blood system fires off the slower but vital ‘Intrinsic Pathway’. In healthy animals, both lead to the ‘Common Pathway’ and the sealing of the wound with a blood clot.

The importance of fast and efficient coagulation is obvious cases of external injury. But it’s equally vital in repairing internal damage such as bruising and trauma within joints and organs.

‘Haemostatic disorders’, such as Haemophilia and Von Willebrand’s disease, are faults in the coagulation cascade that prevent blood clotting or make it dangerously slow. Many rat poisons work by blocking the rodent’s coagulation pathways so that it dies of internal bleeding from organ or tissue damage.

Specific symptoms vary with each type of bleeding disorder or poisoning, but may include spontaneous or uncontrollable external bleeding – such as nosebleeds, lameness due to bleeding into joints and anaemia.

If your vet suspects your pet suffers from a haemostatic disorder or has been poisoned, that diagnosis is checked by taking a small sample of blood, activating the coagulation pathways and measuring how long it takes to form a clot. For a healthy dog, the Activated Clotting Time (ACT) is 60 to 110 seconds and for a cat 50 to 75 seconds. Overlong clotting times in dogs and cats might also indicate a vitamin K deficiency, or treatment with blood thinning drugs.

ACT-VETube is a quick and convenient veterinary laboratory test set for reliably measuring the Activated Clotting Time (ACT). With the ACT-VETube Test Kit, a syringe and needle, watch, and the warmth of their own hands to incubate the test, every vet is fully equipped to diagnose and begin to treat most haemostatic disorders, right away.