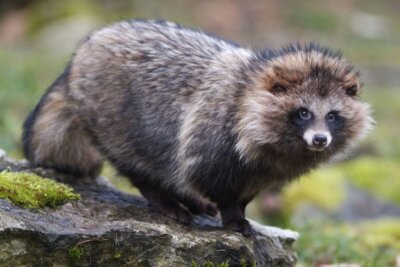 Cute and appealing they may look. But what are the consequences of keeping unsuitable pets when they become too much for a home to handle?

Perhaps the UK’s most notorious species invasion is the ferret-like North American mink. This voracious hunter is devastating wildlife in all regions of the UK except the furthest reaches of northern Scotland, Eastern England and North West Wales.

The UK’s next uninvited animal guest looks set to be the East Asian raccoon dog. Named from facial markings that resemble the bandit mask of the American raccoon, this native of South East Russia, China, Mongolia, Korea and Vietnam is more properly defined as a kind of wild dog.

Also known as the mangut or tanuki, raccoon dogs – scientific name Nyctereutes procyonoides, have already spread through Europe as far as Switzerland, the Netherlands and Scandinavia where Finland struggles to evict an estimated 250,000 unwelcome animals.

Unchecked by natural predators such as wolves and the European lynx, raccoon dogs will eat practically anything that moves; devastating small mammal populations, ground-nesting birds and amphibians. Fast breeders, they quickly out-compete native foxes and badgers for space and habitat.

They are cute and appealing but they are not pets

Already present in the UK as household pets, the bandit-faced critter’s notoriety is set to increase – the RSPCA already picking up runaways from locations as far apart as North Wales and Dartford in Kent. More escapes and abandonment is feared as owners discover just how bad a pet a raccoon dog really is. Quoting an RSPCA senior scientific officer: “They are cute and appealing but they are not pets, they are wild animals. They need a lot of space and a very specialised diet and they are also smelly.”

Potential carriers of rabies, raccoon dogs are not yet banned under the Dangerous Wild Animals Act but abandoning, releasing or letting one escape risks prosecution under the Wildlife and Countryside Act.

Controlling unwelcome animal invaders, like the raccoon dog, is even harder when the culprit is microscopic but no less of a threat – not only to Britain’s wildlife, but to our commercial and domestic animal welfare and to human health. Many tick and insect-borne diseases, including leishmaniasis and anaplasmosis can spread to animals and humans from pets infected while travelling abroad with their owners.

The EEC and UK Pet Passport schemes help to ensure that animals travelling across international borders are healthy and disease free. But spotting these microscopic invaders back home, and protecting the health of people and pets, depends on responsible owners building a strong relationship with their vets and veterinary laboratory where diagnostic testing can help oust an unwelcome guest before it becomes an uncontrollable invasion.