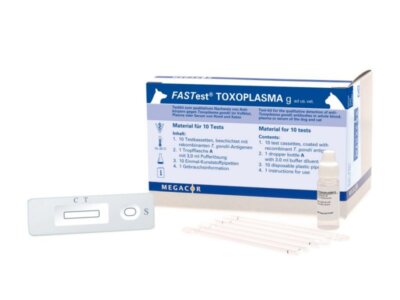 Toxoplasmosis – caused by the parasite Toxoplasma gondii, a well-known disease of domestic cats, is also a potentially devastating disease of sheep. A paper published in the Veterinary Record estimates that toxoplasmosis in sheep costs UK farmers about half a million lambs a year through premature abortion; a figure that translates to a financial loss of between £12million to £24million annually.

The Government’s own Veterinary Investigation Diagnosis Analysis lists toxoplasmosis as the highest cause of aborted lambs (29%) second only to Chlamydia abortus (47%) with an estimated 70% of all UK flocks already exposed to the cat-borne parasite (FlockCheck Data 2004).

In the cycle of infection, domestic and feral cats act as the great distributors. The parasite reproduces in the cat’s gut before escaping in the faeces as dormant eggs or ‘oocysts’. When the cat kills and eats a rodent that’s accidentally ingested these cysts, the cycle starts over again. But when widely roaming cats spread the parasite onto pasture land, livestock bedding and animal feed, it’s often sheep that become the next host.

Once eaten by sheep, these dormant oocysts become active causing aborted or ‘weakly’ lambs, and sometimes infertility on a flock-wide scale. As a single cat dropping contains enough parasite to infect 100 ewes, and these oocysts can survive in a pasture for well over a year, it’s essential to know the level of infection within a flock.

In cats, the disease is well known; with a range of mostly mild to moderate symptoms. In humans, toxoplasmosis rarely causes any serious illness, although people with weak or suppressed immune systems may be more at risk and, for expectant mothers, there’s an increased likelihood of premature birth or abortion if an infection is picked up early in pregnancy.

For human populations, the parasite’s main impact is on the commercial viability of livestock farming and its potential for disrupting the food supply by reducing availability and increasing prices to the consumer. For this reason, The European Food Safety Authority is recommending all EU member states to monitor T.gondii in farm animals.

The FASTest® TOXOPLASMA g kit from Vetlab Supplies provides a reliable blood test for antibodies created in response to infection facilitating early intervention and infection control. The paper’s authors, JP Hutchinson and RP Smith, conclude that: “farmers and veterinary surgeons should continue to promote appropriate husbandry and vaccination strategies,” The FASTest® TOXOPLASMA g kit could be an integral part of this strategy.