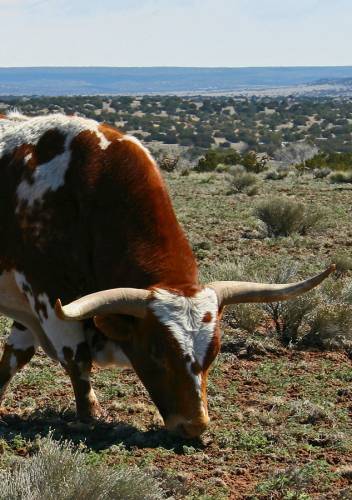 On 8 May 1980, the World Health Organisation declared the devastating human disease, smallpox, officially eradicated in every country of the world. Only one other disease has been similarly eradicated at the global level: the 2000-year-old disease of wild and domesticated cattle, Rinderpest.

Similar to the measles and canine distemper virus, rinderpest is a single-stranded RNA paramyxovirus invading via the respiratory tract through contact with infected body fluids or contaminated drinking water.

Rinderpest symptoms include fever, mouth ulcers, diarrhoea and mucosal congestion followed by a general weakening and death within 8 to 12 days. Also called steppe-morain and cattle-plague, the disease is almost 100% lethal in domestic herds of cattle, buffalo, yak and wild cloven-hoofed animals such as wildebeest and giraffe.

The first outbreaks were recorded in Asia as far back as the 4th century and first properly investigated in the 17th. The earliest experiments in immunisation began in the 18th century in response to economic collapse and starvation following the devastating waves of cattle plague that swept relentlessly through Asia, Africa and Europe.

The virulent nature of the disease is exemplified by the severe epidemic that took hold in Europe following the transit of Indian cattle through Antwerp en route for Brazil in 1920. The outbreak led directly to the formation of the Office International des Epizooites (OIE) now known as the World Organisation for Animal Health.

The OIE began a programme of global rinderpest eradication

The OIE began a programme of global rinderpest eradication beginning first with improved animal hygiene, husbandry and disease containment until the first production in 1957 of Walter Plowright’s effective vaccine.

In 1999, the OIE predicted the global eradication of rinderpest by 2011. Despite occasional outbreaks in the decade that followed, in 2011, the rinderpest paramyxovirus was declared as only the second disease, after human smallpox, to be officially eradicated world-wide.

The OIE maintains a post-eradication role of monitoring and control

Although no longer present in live animals, virus stocks are still held in about 20 laboratories around the world. Though intended for vaccine production, the risk of an accident or an act of bio-terrorism remains; and the OIE maintains a post-eradication role of monitoring and control of virus storage facilities.

Eradication programmes for other animal diseases are likely to follow. As with rinderpest, the strategy is likely to involve not just the search for a vaccine, but also the rigorous application of high standards in hygiene, husbandry and containment, together with advances in veterinary laboratory practice, sample management, examination techniques and diagnostic testing.