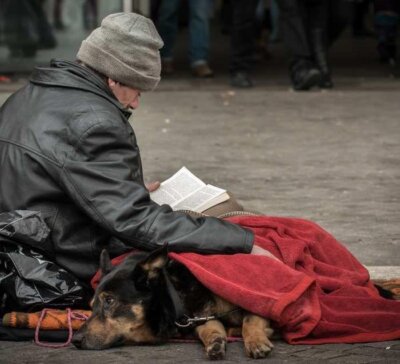 Registered with the Royal College of Veterinary Surgeons (RCVS) and now an officially listed Registered Charity, StreetVet provides a comprehensive ‘out on the streets’ veterinary diagnostics, treatment, welfare and owner education service for the pets of Britain’s homeless.

StreetVet: How It All Began

StreetVet began with just two vets out on the streets of London back in 2016. Armed with only what veterinary supplies and equipment could be fitted into a backpack, ‎Jade Statt and Sam Joseph set out to honour the bond of loyalty they had witnessed between one homeless man and his dog.

Back then, Gary Spall, with his staffie-cross Lola, was among the homeless still to be found on the streets around Covent Garden, London. Lola, a rescue dog from Battersea Dogs & Cats Home shared every moment of Gary’s street life, building a mutual bond of loyalty and dependence. Gary attributed his survival through the worst of times to Lola, telling news reporters: “I don’t know what I’d do without her… It’d break me if I ever lost her.”

Homeless Pets: A Reason to Keep On Keeping On

As with Gary, a pet on the streets provides more than simply companionship for many homeless. A dog or, less usually, a cat or other animal provides a focus for living and a reason just to keep on going. Unfortunately, loved as they are, street pets can find themselves excluded from the professional veterinary healthcare, diagnosis and treatment expected for homed pets. A particular worry for the homeless is who will look after their pet if and when a stay in hospital becomes unavoidable.

StreetVet, now with 300 volunteers on its books, and supported by animal charity Blue Cross, also links homeless pet owners into the charity StreetKitchen with support for their owners too. Owner education is one of the key service points that StreetVet offers, giving owners the vital information they need to understand the particular health risks to pets of a life on the streets.

Emergency care, veterinary diagnosis and treatment is only part of the animal charity’s work with Britain’s homeless pets. Just as with any pet and owner fortunate enough to a have a roof over their heads, regular health checks, vaccinations and follow-up appointments are all part of assuring a pet’s continuing well being even after the crisis has passed.

Now an officially registered charity, StreetVet operates in Brighton, Bristol, Cambridge, Plymouth, Birmingham, Cheltenham, Southampton as well as in London and Cornwall. In their first year and a half, over 200 street dogs were vaccinated, microchipped (now a legal requirement), treated for fleas and medicated against parasites such as lungworm. Other pets were prescribed pain relief and some even received surgery.

As with all charities helping people or pets, StreetVet and Blue Cross are dependent on the generosity of the public, veterinary professionals and specialists in veterinary supplies and equipment. Vetlab supplies helps support animal charities through preferential relationships in the supply of veterinary laboratory equipment, laboratory consumables and diagnostic test kits.

Contact us about our Charity Discounts! Telephone: 01798 874567 and we will be delighted to help you.